Currently, conventional cars use combustion engines to convert energy stored in fossil fuels to mechanical energy. Unlike these conventional cars, Forze powers its cars by using hydrogen-based fuel cells, a clean and sustainable option. Since its foundation, the mission of the team has been the promotion of hydrogen as a clean and sustainable fuel in the mobility sector by racing with hydrogen fuel cell vehicles.

By combining motorsport with clean and sustainable technology and competing in races and other events, Forze is able to demonstrate hydrogen up to its maximum potential as an alternative fuel. To this day, the team has developed and built eight hydrogen powered race cars in the last fourteen years. 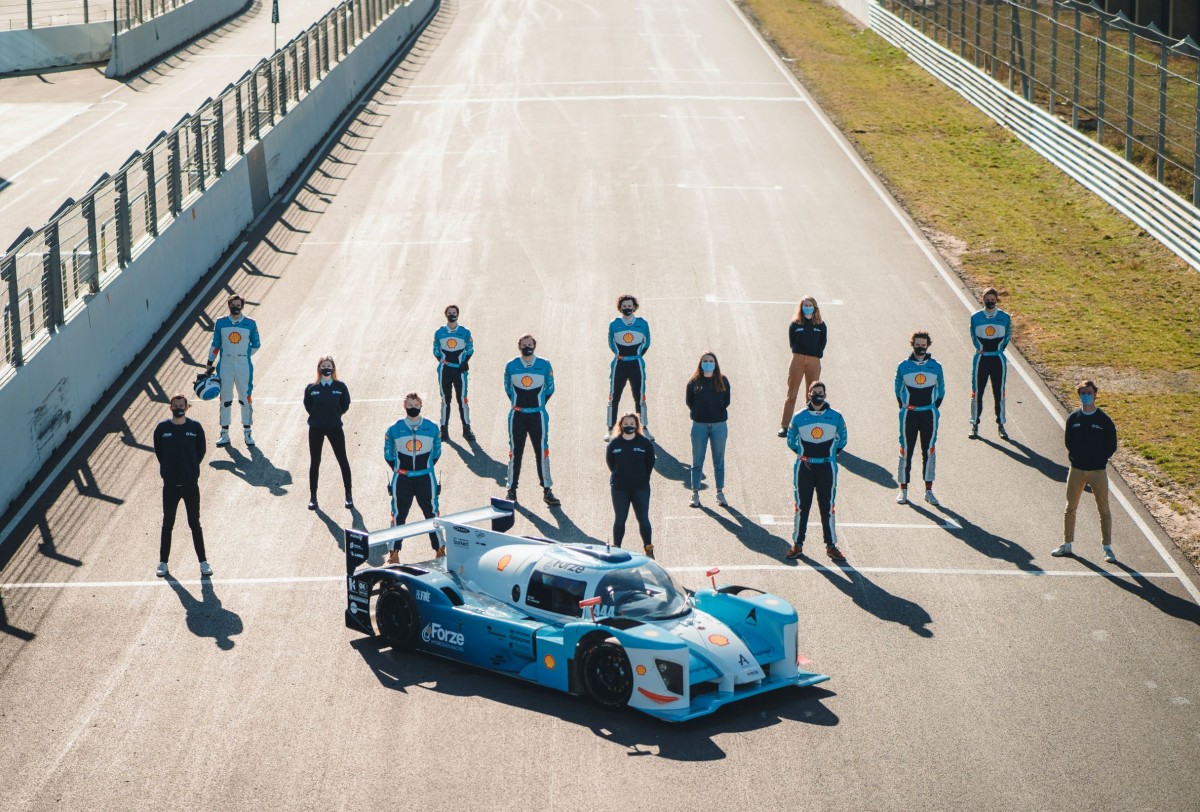 Next to the fundamental mission of promoting hydrogen at an international level, Forze has a yearly challenge. Currently, the goal of the team is to design and build the next generation hydrogen powered race car, the Forze IX. With the completed car, the goal is to race in the GT class of the Dutch Supercar Challenge. By competing against petrol powered cars in higher classes than the team has raced in before, Forze has the chance to give hydrogen technology its deserved attention in the industry. In the future, Forze plans to continue improving their vehicles to compete in the highest classes of the Supercar Challenge and eventually progress to an official endurance series.

For decades, people have been predicting a global shortage of energy sources due to the high consumption of fossil fuels. As one may assume, the automotive industry is one of the largest contributors to this shortage, due to its high dependency on non-renewable fuels. Hydrogen, on the other hand, can be produced with renewable energy sources like solar, water or thermal power.

With the rising problems of pollution due to conventional petrol powered engines as well, an alternative to these engines is needed. Fortunately, fuel cell technology is a clean and sustainable option. All Forze cars employ fuel cell technology to convert the energy stored in hydrogen into electricity, with water being the only waste product. A hydrogen powered vehicle generates electricity in its fuel cell using hydrogen from the tanks and oxygen taken from the surrounding air. This electricity is then used to power electric motors. The only exhaust from the vehicle is pure water. Hydrogen can be produced using electrolysis, which requires energy. It is therefore important for said electricity to be sourced sustainably in order for hydrogen fuel cells to truly be considered a renewable fuel source.

One of the advantages of using hydrogen technology as opposed to conventional combustion engines is that its efficiency of fuel conversion is about 35% to 50% higher. In addition there is the reduced time required to refill a hydrogen  tank (which can be refilled within minutes) over a car battery. The driving range is a plus as well since this can be well over 500 kilometres. However, the Forze VIII is not designed to drive 500 kilometres. It is designed to go from 0 – 100 km/h within four seconds and reach a 210 km/h top speed. Because of these more aggressive settings the Forze VIII can drive for about 50 minutes on full power. 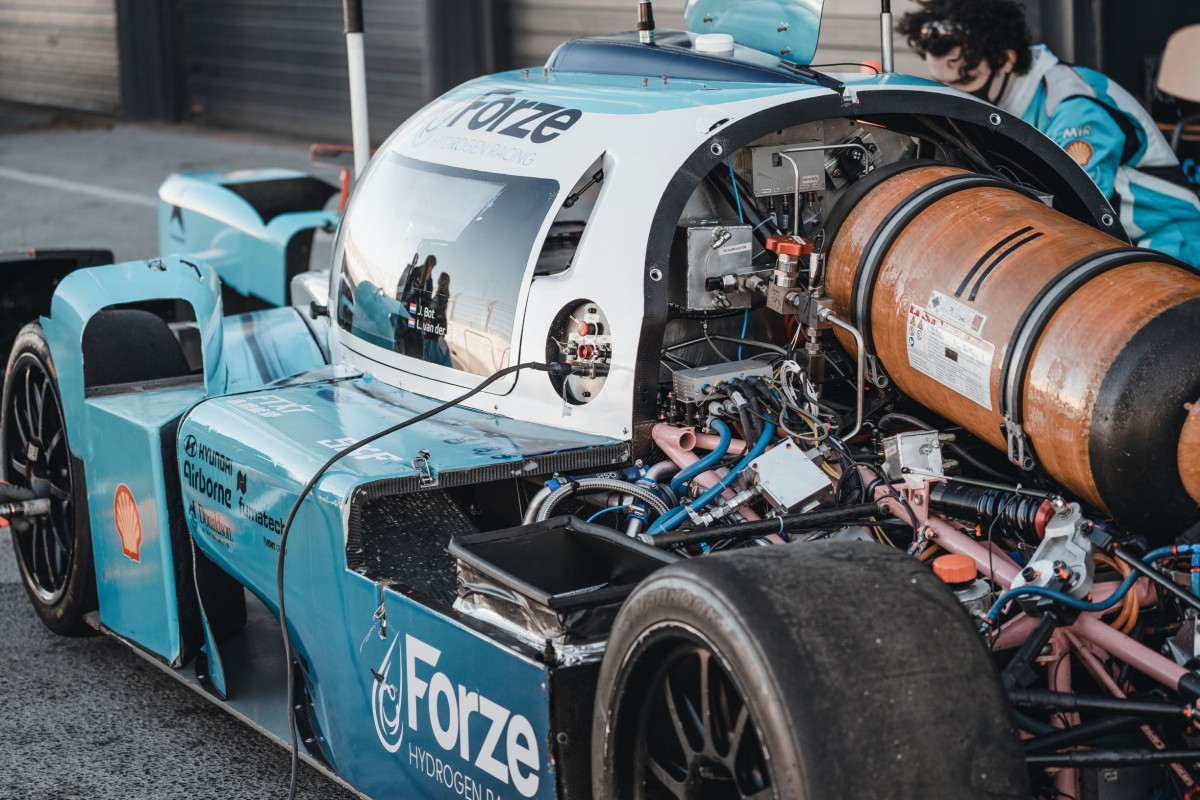 A fuel cell is a device that converts the chemical energy of a fuel and an oxidiser to electrical energy. For all Forze cars, hydrogen is used as a ‘fuel’, while the oxidiser is the oxygen from the ambient air. With hydrogen and oxygen, the fuel cell produces electricity, heat, and pure water through a redox reaction.

The principle of a fuel cell is based on a proton exchange membrane (PEM). PEM fuel cells consist of a polymer membrane in between two electrodes, which form a membrane electrode assembly (MEA), which is shown in the schematic. The principle of this fuel cell is as follows: hydrogen (the fuel) enters at the anode side, while oxygen (the oxidiser) enters at the cathode. The PEM allows – as its name suggests – the protons from the hydrogen molecules to diffuse through it, while the electrons are forced to travel through an external circuit, thereby generating electric power.

Controlling and operating a fuel cell stack is a delicate process. A complex system of sensors, pumps, and control systems, developed by the team itself, form the “Balance of Plant” (BOP). This system supplies the stack with the necessary amount of hydrogen and oxygen as well as sufficient cooling for its operation. Forze focuses on making its fuel cell system compact and lightweight.

Forze made a realistic simulation of their latest vehicle, the Forze VIII in Panthera in the simulation environment of Cruden. Due to its electric drivetrain it is completely different to drive than regular ICE racers. Besides the fuel cell, a buffer system of super-capacitors is installed that allows for energy to be regenerated during braking. This can then be used as a boost when accelerating. Forze uses the Sim Pedals Ultimate in their simulator for both training and research & development purposes. 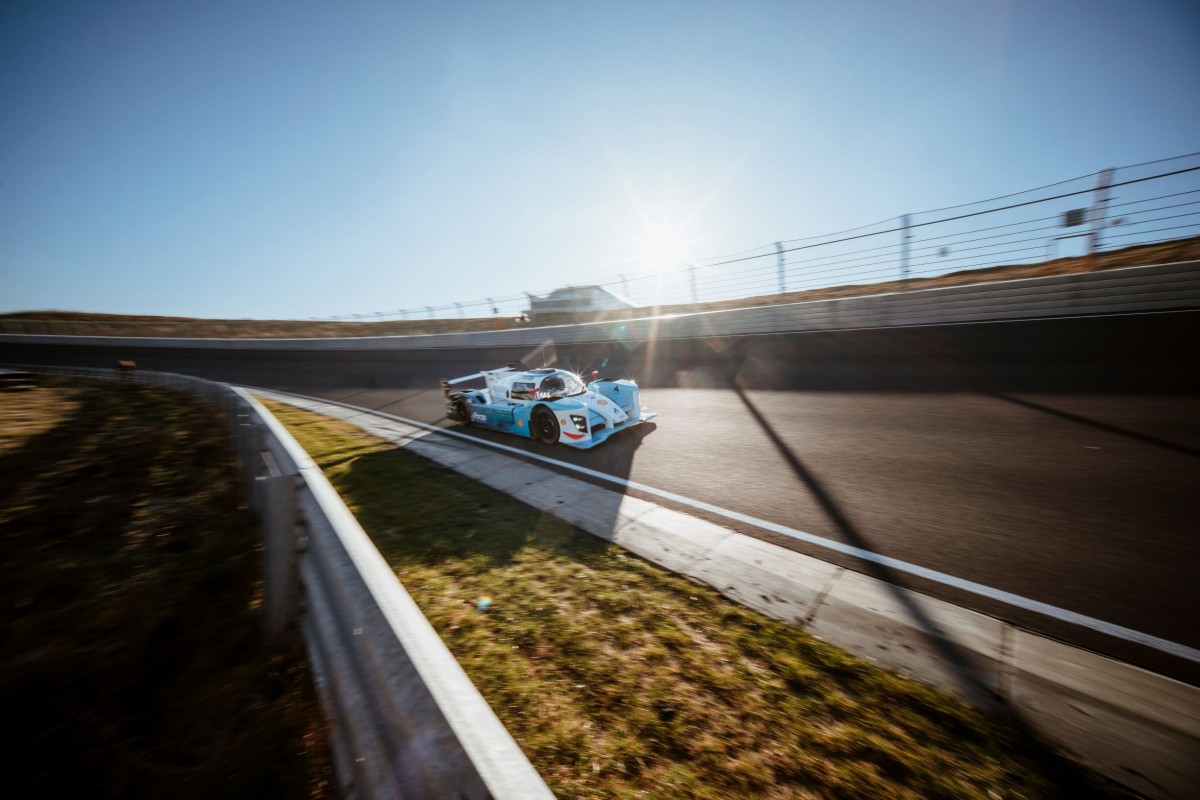